Welcome to Mi'kma'ki. Land of the rising sun;

Here is a large region covering the most easterly coast of Atlantic Canada
Indigenous people have lived on these coasts and lands for several thousands of years.
Souriquois; 'men of the salted waters'
They are the first ones
We owe the forefathers and gardians of the earth, all our respect. 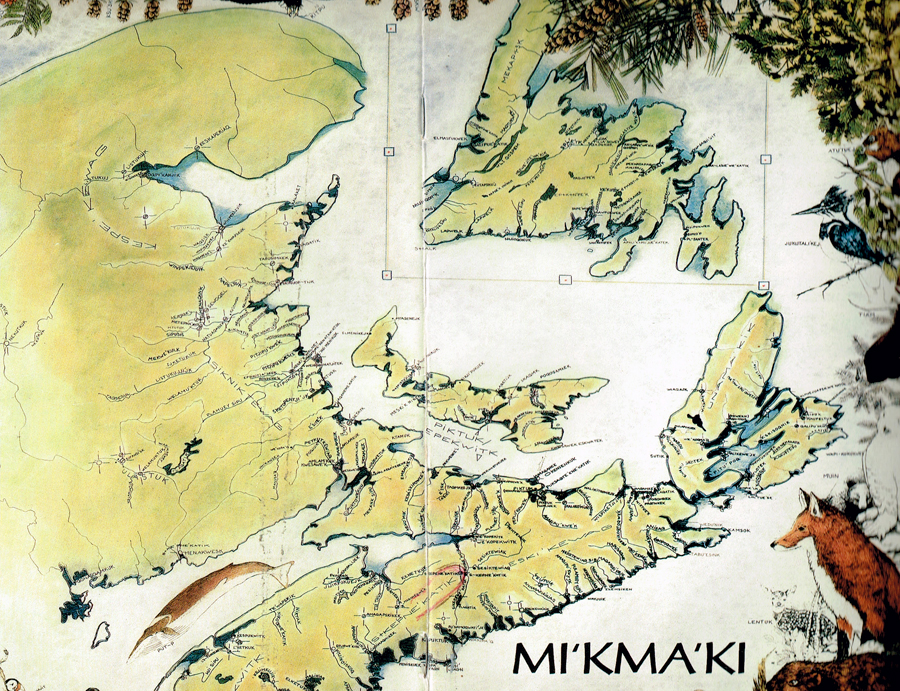 listen to a man of wisdom from the heart of Mi'ma ki Mr. Stephen Augustine

For too long and still nowadays, insufficient place is given to the ''First Nation'' factor in the make up of the ''canadian'' at large but certainly the making of the Acadian and French Canadian character and identity.

For too long, the idea that mixed blood had ''possibly'' occurred between the first Europeans and certainly, the French colonist and the Natives of Eastern Canada (and likely from East to West, as expansion evolved) was perceived as a form of ethnic dissolution, as if the original elements of a culture would be somehow impoverished if another series of genetic traits altered the initial balance of the ''in-comers''.

We can now say those were very Eurocentric views, because, visitors, "we were"!  And without this remarkable welcoming attitude expressed in countless forms by the aboriginals from the 1500's on, the destiny of this country would be altogether different and much poorer in multiple ways. 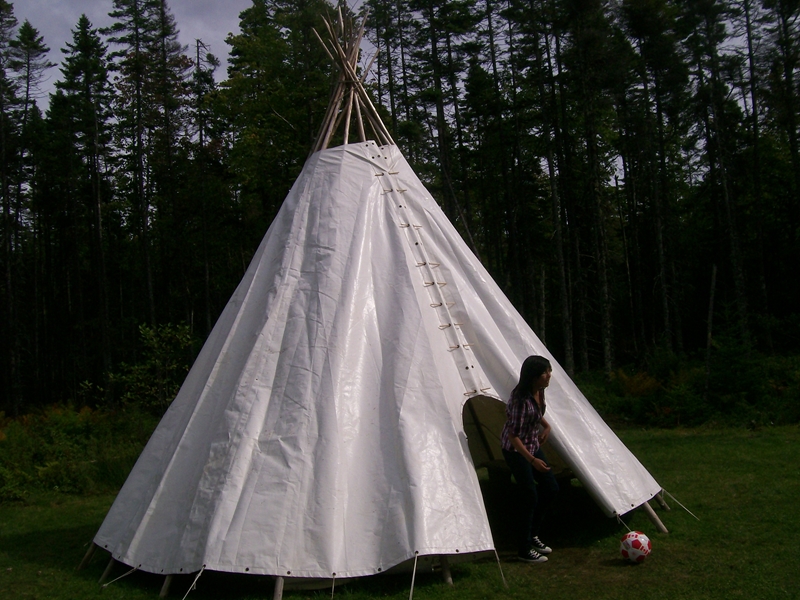 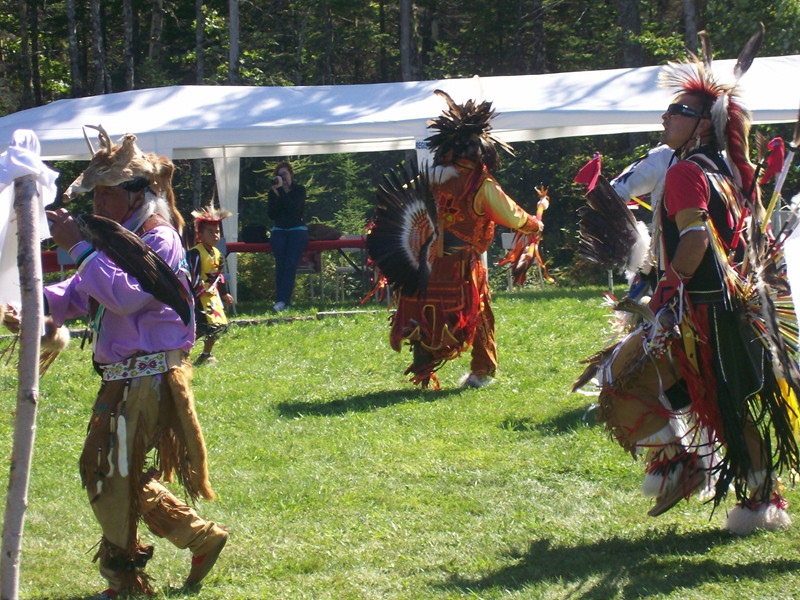 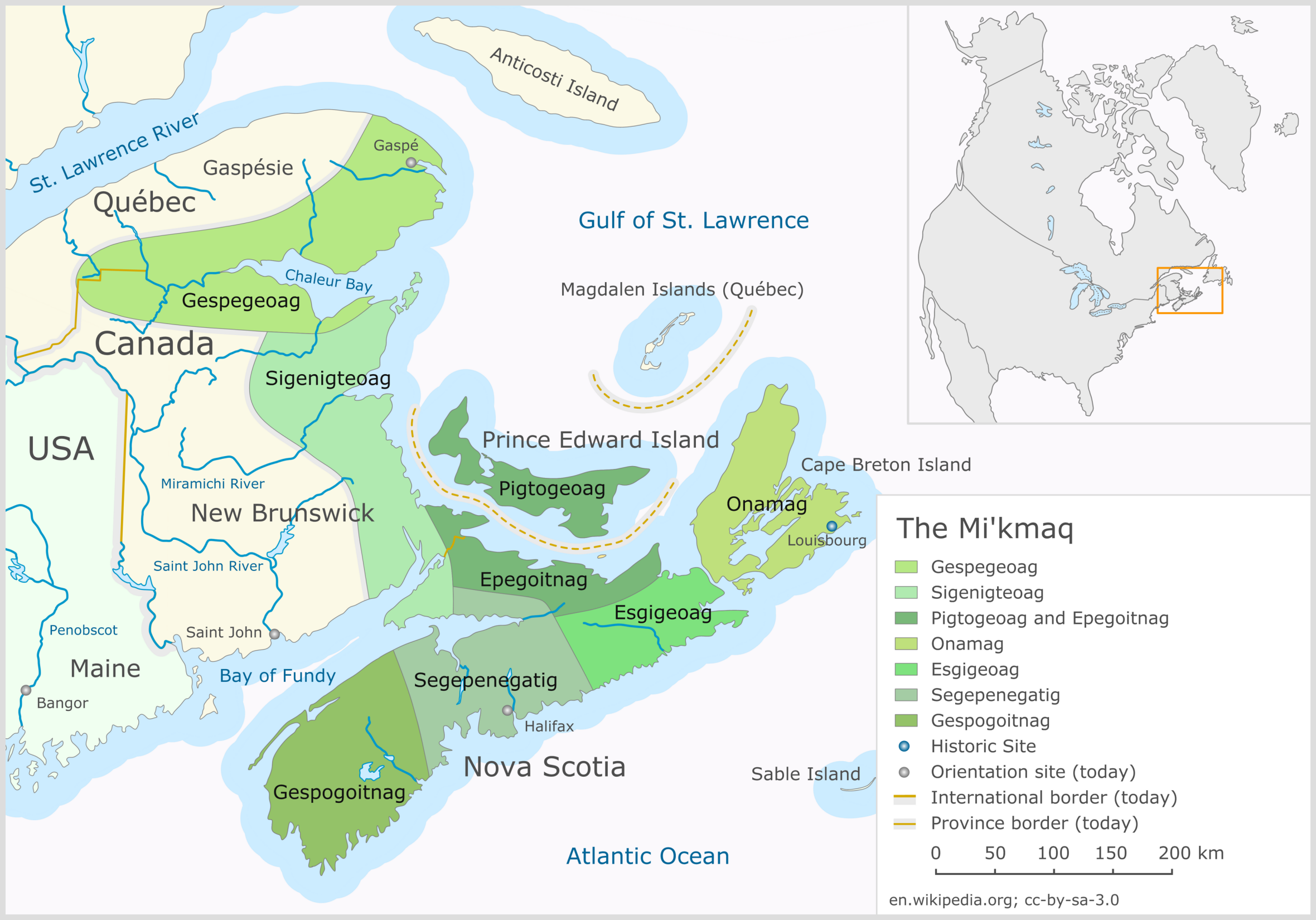 The First Nation heritage is an integral part of the cultural and natural landscape of America. Acadie is no exception to this.

Several thousand years of physical experience and material evolution was then transfered to the new comers as they shared a ''new world'' and a fused destiny.

From the simplest item in our lives, to the more complex form found in and around our day-to-day environment, the First People have left their influences and their marks, if they were not the true initial conceptors of these wonderful inventions we now take for granted.


From a larger spiritual stand point, some would say, that, although, their voices are not heard as they should, they preceeded us within the grand circle of the world's nations.

The symbolic logo associated with the Mi'kmaw, which exhibits the four colours inherent to world's population (Black, Yellow, White and Red) is a solid testimony to the unity ''to be'' and the common roots of all people of the earth.

Respectively, ''black'', from the African continent where the first humans appeared, ''yellow'' embodying the Asian essence, where the largest population exists, ''white'' associated with the caucasian trait and the ''western world'' while the ''red'' representing the First Nations, the latter, standing on guard, preserving some of the most elemental values of humans; the indisputable connection we have with the land and sea and all forms of LIFE around us and within.

...In the First Nations, to hurt one small element of this fragile and inextricable ensemble, hurts the whole in one way or other, directly or indirectly.

Novacadie Tours acknowledges these notions by conducting ecologically friendly and moraly enriching excursions of this 'unceded territorry' and wish to convey these notions to its clients for a broader appreciation of the infinite beauties around us!

From a far and distant land you came searching
For land to claim
Your journey was rough,
Troubles were plenty
Disease and starvation
Took lives of many.

The Mi`kmaw were not shocked
By your presence
The old ones foreseen it in a vision.

You called our land a paradise
Oh.. the beauty, delighted the eyes
So different from your home in France
The people, the culture, music and dance.

That first winter here you all would have died
Had the Mi`kmaq not shown you how to survive
The friendships they formed. with one another
Remains strong today a bond like no other.

The British Army came that day
Expelled from this land. took your men away
Tears of despair.. from the women and children
But safe they were with the Mi`kmaq Nation.

Your journey has brought you home again
To live on this land with your Mi`kmaq friends
Together again, in peace and splendor
It's the tie that binds.. a bond like no other.

As I walk along the same paths that my ancestors traveled many moons ago, a sense of warmth and oneness engulfs me as a Mi'kmaq woman from Mi'kma'ki. Reflecting on days long past, the stories of what life was like for my ancestors cannot be told in books, but by 'experiencing' the story through 'our' eyes.


"Métis is one of several terms used to describe people of mixed native and European origin.
The word Métis is an old French word meaning "mixed." Other terms that have been used include mixed blood, bois brûlé, michif, and country-born.

Today the term Métis refers to a distinct group of people who have a common history and heritage."

"The first Métis were the children of European fishermen and native women along the Atlantic coast of Canada. In Acadia, many French men took native wives. Some villages became largely Métis. During the 17th century, both the French and the native people encouraged mixed marriages. For the native people, these marriages strengthened their bonds with their allies and trading partners. The French authorities came to oppose these unions. The church in particular was concerned that the young men preferred the freedom of life in Native country. Métis children either stayed with their native mothers or were raised in French society. The Métis population increased farther inland. Fur traders and soldiers settled around the tiny forts and fur-trade posts. These communities formed the basis of many future towns and cities, such as Sault Ste Marie, Ontario, Detroit, Michigan, and Chicago, Illinois."
==================

As always, you never fail to deliver!
Thank you for sharing your native lands with us. We could have never done this on our own!
Wishing you a continued and growing following!